Mutants of Marnharnna: Pt. 15: Between a Lock and a Hard Place- 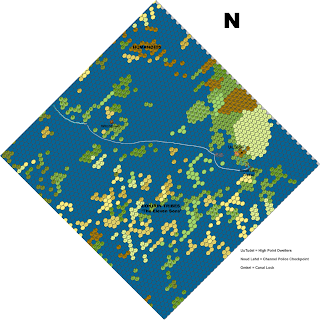 The long and short of the situation is that the military cargo of the schooner cannot be offloaded nor abandoned under any circumstances, and so the paddlewheeler captain begged the party to flee while the other craft did its best to hold off the catamarans while help was sought from Fort UuTudel. As the paddler (laden with passengers, but having thrown overboard two slot-machines) lingered, a flak shell was launched and detonated close enough to all but destroy its wheelhouse. Kitsune was able to effect enough repairs as to operate the craft, and away they went. Zalder delivered a few well-placed firebombs again, and rejoined the paddler.

Nyqolas discovered that he was not regaining Alertness DP, but the cause was not disclosed for some time. Osyl, recovering with the aid of healers sent by Lady Arctise, became conscious as what appeared to be a 'zombie leg' was sewn onto the stump of her right thigh, and all manner of bizarre things put inside (twigs, leaves, etc.), including what Osyl thought was the skeleton of a weasel-like creature. Upon full consciousness (around the time the flak struck the ship), she felt the weasel stirring inside the hollow-seeming limb, and at one point, the thing appeared to pop out and chitter at the woman. Shenanigans involving trying to raise one of the healers killed by shrapnel by sacrificing the eldest of the lizard-girls was foiled by Osyl with a Frost-substituted (Void)-blast that was very convincing. Nyqolas, using his Inspire suite of powers, was able to draw DP from those that responded to the ruckus and raise the recently expired healer. The attempt to sacrifice the girl was not prosecuted at the time, given the gravity of the larger situation, and folks went their separate ways. One of the healers was able to see a glass creature (like a stirge crossed with a su monster and a beaker and flask kit) crawling upon Nyqolas' body, apparently drinking from his Dynamic Pool and preventing him from recovering one mote of pwer.

As sunlight was fading, Kitsune spotted something on the eastern horizon, but it wasn't until the craft neared that it was determined to be at least 40 12-person canoes of Dokirin origin, seemingly awaiting a signal to row from the Eleven Sons area towards the fort which was clearly already under attack. With no real hope of staving off a concerted warband in the damaged craft, it was decided to circumvent them and press on toward the lock. Soon, the signal was given in the form of a star-shell sort of munition deliberately aimed low to kindle fires throughout the otherwise stalwart fort atop stout rocky hills.

Reaching Noud Lehd, the party witnessed a desperate skirmish battle fought between lock engineers and Dokirin war-scouts. A few DiVinci-esque battle devices helped turn the tide and the PCs' presence tipped the scales in favour of the Vrun forces. With the drydock available again, the paddler was brought in for repairs with the goal to reach the tidal lake by high tide still in the realm of the possible. Disembarking, the Party scouted the area ahead of the passengers, and was informed that a hidden entrance to a tunnel leading to UuTudel was to be found in the cluster of ruins at the far end of the dock.

I had used a combination of Heroscape tiles, foamcore terrain tiles and paper boulders made by my sweetie, felt pads from Michael's crafts store, and a piece of store-bought terrain for the ruin, and then covered the table in a sheet so as to minimise the Players' knowledge of the battle scene's layout. We fought the lopsided battle for roughly two hours of gameplay, with Zalder suffering a downing and unconsciousness at the hands of a third-wave Dokirin group. One of these had a softball-sized glassy sphere in his off-hand, and utilised it to illuminate the outer reaches of its radius effect, while the bearer was barely lit (the outermost region was brighter than the inner, ya'see?). Zalder had backshot that one and with the bearer's demise, the light slowly faded, but gave Nyqolas the opportunity to spot the downed Zalder (floating in the water atop the air-sled), whom he fetched and woke.

The last of the on-table opponents was defeated and the effort to begin looting the dead was initiated. Nyqolas picked up the sphere and failed a Control Critical Test (a Spells Save in D&D terms), coming under the gaze of what appeared to be a one-eyed Abbekqorru shaman/sorcerer who then forced a second Control CT, which Nyq was able to deny, but went unconscious in the exertion (burning 8DP to boost his chance to succeed by 1d6). The object was then pried from the now-useless-rendered Nyqolas by Kitsune, with a dagger and with some blood loss. As Nyq lay unconscious, the female sorceress informed him that her glass homunculus (on the Plane of Glass) was siphoning his vitality and reconstituting her body.

The decision to stay with the craft, or make the perilous trip through the tunnel to UuTudel, faces the Party upon commencement of this scenario next time.

Posted by Timeshadows at 8:34 AM 5 comments