The Glassblood Warlock in the ECUWoM game masterfully read and loopholed a demonic contract, and then killed the Ice Demon's material form while it still owed her a 'favour', and it cannot harm her while it still owes her.  She levelled up to 10th and is pretty terrifying in a combination of flagrant disregard for safety as well as her excellent timing and wild rolling luck.

The wet-work team (still) trying to get Captain Buck Rodgers' Starfighter from off of a large ship were stymied by a decontamination chamber leading to/from the hangar where it is located, and were attacked by eight armoured, and blaster rifle armed troops who were rolling criticals.  EC has an interesting armour / defence rule, and each layer of protection was rolled in the hopes of bringing each critical first down to a regular hit, then halving or perhaps even negating the damage.  One PC went through all but one of their re-rolls (an elemental blood power) to try and avoid death, including providing a re-roll on a survival roll to the other PC.  In Buck Rodgers TV series fashion, they wake in a mood-lit medical lab with a sardonic butcher as doctor urging them to struggle so she can dissect them.  They are to be presented to the space pirate lord who operates the ship. 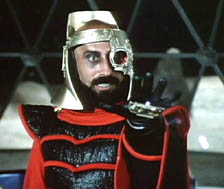 Posted by Timeshadows at 12:47 AM 2 comments