* Continental Vrun Contingent Visit
:: Observing Xudorn for themselves, elements of the Vrun National Service, the Hierophantic Church, the Guild Council, and both the Monarchalist aristocracy as well as their foils, the Parlimentarian faction visited the tripartite colony. The two Black Crown destroyers anchored at the mount of Safety Bay, the Western Isles mercenaries, and rumours of Abbekqorru allies helped persuade the Continental Contingent to leave Xudorn to her own devices...for the time being. The Contingent then sailed further north up the coast, visiting other Vrun colonies. News that Ft. Greenpennant (home of the Green Cavaliers) had been bolstered to exceed Xudorn's population was also received.

* 'Skullcrusher Mountain' / Upthrust
:: The PCs have returned to the complex, studying the technology that empowered the Undead-creating attack upon the Wodic community, discovering that the Lower Planar radiation that remains in the 'reactor' level is still deadly enough to turn a living human into an Undead in a matter of weeks. Also, part of the sensor array of the gun system is receiving ultra-low frequency transmissions from various points on the globe, including Bereme Oykh/The Black Crown to the north.

* Dokirin Community living in the shadow of the Upthrust
:: Reports of a settled clan of Dokirin were confirmed when four PCs visited them, and are set to participate in a sacred dance. They are the Omu Aku Qelli Duuon >Flowing-Water, Plan, wisdom-Imparted, Settlement-on-Water< . Repairs to the clan's sole windmill (used to evenly water marsh-grain paddies), and exchanges of durable goods for grain have been ensured. Sub-Commander Ssu Rosenbrad became the clan's new Wise Woman at the death of the 250+ year-old man she had re-awakened from his visionary existence in Lord Worm's court (as both are Silt-blooded).

* Visit to Mostern Colony
:: Commander Roland Peltier, Sub-Commander Ssu Rosenbrad, and their trusty squad travelled overland to Mostern the 'City of Bricks'-to-be, and with Joe-the-Lawyer's LotFP Grindhouse Edition Specialist-character, Vesper, explored the vast fort colony. It is predicated upon the production of bricks, and has a 6:1 male to female ratio at present. Xudorn Cider (made from salt-marsh crab apples) was a bit hit, and 100 bottles were purchased. Another sale was of one of Xudorn's experimental (and portable) refrigeration units. This has occurred slightly ahead of the standard timeline, allowing for intervening events to transpire, as well as to permit Vesper to participate.

Posted by Timeshadows at 10:39 AM 0 comments 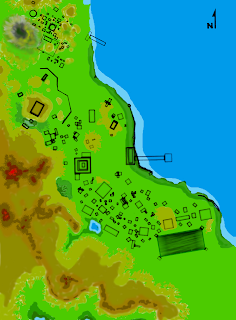 Posted by Timeshadows at 6:54 PM 0 comments

As Pertains to Marnharnnan Exploration-

Minnesotan over at TYWIKIWDBI has an excellent teaser on Westward Migration, and of greater importance to the UWoM Boxed Set/Vanguard campaign, is the degree and duration of Native cooperation and goodwill.

Posted by Timeshadows at 2:21 PM 0 comments

Shifts in Technology and Mindset: Xudorn- 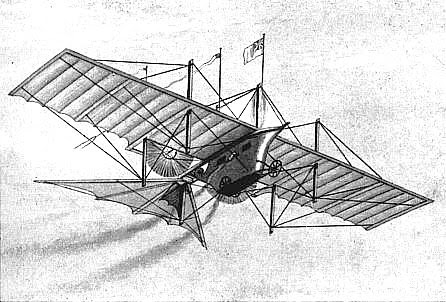 In my Google+ weekly game, Xudorn (The Sublime Colony) has seen very rapid change in both technology and the Vrun mindset. With the importation of the ornithopter kits came the paradigm-shift of three-dimensional thinking and the resultant drive towards expanding the realm of the known lands. Through these travels, the ground maps have been refined, new peoples have been encountered, and ideas for improving/expanding the overall technological base of the colony have resulted.

Last night's game was mostly dealing with meta-discussions regarding the 16 Elements, their potential exploitation for powering larger aircraft, and the differences between real-world physics and the alchemy of the setting. From these, in one session, 'x-ray' technology, crystal-lattice cultivation, combined dirigible/aeroplane plans, and negative energy induction are in development.

At the same time, political changes are under way as the renown of the colony begins to spread on both the Western Isles, and the Vrun continent, bringing the 'big three' of Vrun society to the distant Marnharnnan shores. The Hierophantic Church, the Guild Council, the Vrun National Service (military), and elements of the Aristocracy are growing (rightly) concerned that the developments in Xudorn have rapidly outpaced all expectations of what had previously been an anonymous point on an ill-known map. Moreover, that foreign influences and ideas have not only taken root, but their fruit is already come to bear (least of which is Lady Hudernm's half-Durn child), with rumours of Alien (Abbekqorru) technology and reports of the conflict with Undead rapidly spreading through well-informed circles at various strata.

To counter the investigative incursion, the tripartite ownership interests of the Xudorn experiment (one each of Vrun, Western Isles, and Black Crown) have moved to protect the fledgling population by positioning Black Crown naval assets at the mouth of Safety Bay, and a small contingent of Western Isles mercenaries are on their way with the afore mentioned owners steaming ahead (on a smokestack paddlewheel schooner) of the Vrun galleons. The Black Crown delegation gifted the PCs with Black Metal daggers, styled in one of 12 of the material Elements, and provided a taste of the sorts of elemental technology the Crown has at its disposal (including a 1/72nd-scale locomotive set).

All of this is coupled with the very recent discovery of Living Ancients who have apparently dwelt in a very ancient fort once visited by the former Vrun occupants of Marnharnna as a historic tourist site. These folk seem to possess not only a very complete overview of the past of the world, but disturbingly accurate knowledge of the past eight decades of contemporary history despite the fact that they have lived in near-total isolation for at least 5,000 years. Their texts even suggest future events, namely a massive invasion by the fearsome and loathed Shorrannin.

Posted by Timeshadows at 10:35 AM 3 comments