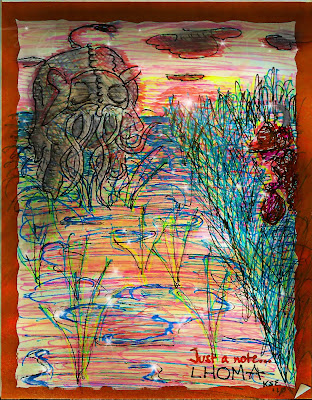 The worker is harvesting the ubiquitous blue marsh grain as a domesticated entomalian Xhund slowly ambles through the marsh toward the camera at sunset.

Posted by Timeshadows at 5:09 PM 10 comments

Canageek's POST regarding his ... dissatisfaction with RPG combat coupled with his desire to run a dungeon crawl reminded me of the old LODE RUNNER and TROLLS & TRIBULATIONS side-scroller computer games, and how they required a more 'lateral' mentality to advancing one's desired looting goal, primarily by avoiding the opponents, or trapping them in pits, or behind blocks, etc.

I truly wish more gamers would tackle adventures in this fashion.

Posted by Timeshadows at 2:10 PM 40 comments

[Playtest Campaign] Yes, we have no bananas (&) [Another Update]-

It appears that there will be no game tomorrow.
--Finals and such for players.

While I have been quiet for a few weeks, I have read a few of the many blogs I am sub'd to, and I'm generally aware of the goings-on of Bloglandia.
--I am simply too busy writing to do much of anything else.

I dreamt of charts & tables last night, and so I have busied myself with things to aid both Player and Referee in running characters: motivations, personality, names, etc.
--Each Ethnicity Module will receive a good amount of detail, and each of them is structured differently to provide a different play-experience. This became necessary once I looked at the configurations of the tables and saw more than slightly incongruous possibilities despite tortured modifiers and different die-roll-ranges.

I hope to have .pdfs for sale of the Vrun and Dokirin Character, as well as the Combat Modules before the end of May, adding another two or three Modules each month until the entirety of the Players' Manual is compiled, roughly August/September.
--At that point, the Referee's Manual should be under-way in earnest (including articles/essays written by others). I am still envisaging the third book, but I think it will combine Critters and Loot with a few other bits that seem appropriate.

My various 'out-of-town' playtest groups will receive these files prior to their 'going live', as it were.

Posted by Timeshadows at 8:12 PM 6 comments

:: We played. Stuff happened. Didn't happen. Happened differently. and again.
--Player frustration at lack of direction prompted me to introduce a passive guide. I'll have to ramp it up, apparently.
:: Changes on the page have overtaken the incidence of changes in-play, and I am hoping the store-politic-clique stuff calms down soon, so that we can take the game into the 'End Game' phase of property management and task delegation to new and starting characters (generated from the new procedure). I think the situation is too far advanced to be saved, which is a pity. We may not all share a common respect and admiration for each other, but we were all raised to be courteous and civil.


:: Busy writing the revision...
:: Overall reduction in power-level (toned down the Ability Modifiers table, etc.)
:: Playtesting the extremes has helped determine the desired fine-tuned averages. Sometimes, I think the Playtest-nature has conflicted with 'playing it' for its own game-sake. --I have an offer or four for final playtest groups, and hope to complete enough of it for the NTRPGCon player handout.
:: Pandora has been playing a nice mix of stuff so far today.

:: Elemental stirrings as a powerful Earth-aligned person sought and won permission of the Governors to raise a temple out around a tiny island off their northern coast. It is decided to host Water, Air, and Fire temples, as well. Tybylt met Lord Shadow for a second time, and received a favour of the entity.

:: Mela, and Darius (now a recipient of Earth-based versions of his Aberrations) head off to the Marnharnnan continent, and the Riverland peninsula, to tend to those suffering what they were informed was a water-borne illness.

:: A lot of 'flavour' regarding the nature and scale of the combat, but also confirmation that multiple realities are operating in parallel synchrony, including the old Pathfinder cast of characters. Next session will involve their outside of craft, individual tasks and (likely) combat.

:: The demons are Mutant, Cybernetic, Demonic creatures with a decidedly H. R Geiger aesthetic to them. So far they haven't encountered any real noteworthy opponents while in the Sphere.

:: The boon that was granted so as to have Tybylt's Shadow-powers and Ashta's Aelbaan-Psychic powers combined, and embodied in one male and one female child. He has the Shadow of Aether power, which grants limited effect upon the Void powers the enemy are using.
The female is to have Aether-fortified Shadow effects, causing the normally 2D shadows take on a full 3D reality as they are 'filled' with Aether. Again, this will allow the ability to affect the Void magicks with the variety of both Tyb's magick and Ashta's and the Sphere's Psychic abilities.

Posted by Timeshadows at 11:24 PM 0 comments

As I am writing the Ethnicity-specific CharGen pages, I have been thinking about how to go about implementing Locus Points for existing characters (such as those in my Playtest Campaign, or characters ported in from some Other Game).

Locus is functionally 'Luck' in a general sense, and from a game-mechanic-perspective, it operates in a way similar to so-called Action Points.

* If a roll is made, and Success or Effect is not generated on rolled (+ mods.) merits, a Locus Point may be expended to re-roll, with the better of the two results being used.

* If a PC would go Unconscious (Condition 1), or is already Unconscious, 1 Locus Point may be expended to roll 1d6. If this d6 result is 4+, the PC becomes conscious, although possibly still (Heavy-) Bleeding, and can act at the standard Condition penalty (6 - Condition).

* If a PC is Dying (Condition Zed), the Player may expend 1 Locus Point to keep from slipping further (once the Zed DP have reached 0). For more permissive GMs of That Other Game who use 'negative x = dead', then this would prevent a PC from slipping into the (further) 'negatives'.

The Referee is encouraged to allow other significant (i.e., non-trivial) uses for the expenditure of a Locus Point, that I have not detailed, and will not detail in the rules.
--This becomes a Player-Referee dynamic mechanism that allows a bit more interaction in the gameplay apart from binary success/failure die-rolls.

:: As these points do not 're-set' at the start of a session/section/chapter, I suggest adding one LP each advancement, and in the event of significant and especially clever gameplay, or deeply moving roleplay, such as putting Duty above one's own life, etc.

* For new PCs, the Player rolls 3d6 seven times, placing six of the scores as desired into the six Abilities, and using the seventh score as the Locus Point total.
--This allows strategic choice in the case of (otherwise 'good'-) scores that wouldn't provide an additional bonus to be placed instead in Locus, with the lower score in a bonus-step (13 on a 13-15 score bonus scheme, for instance) placed in an Ability.

* For extant characters imported from Other Games, to simulate the likelihood of the Locus score being the 'discard', it would instead be generated with a 2d6+1d4 roll.

:: With many uses for (and few methods of re-gaining) Locus Points, I see this mechanism as a little nudge in the PCs favour in what would otherwise be a very deadly game (system).

Posted by Timeshadows at 9:52 AM 6 comments 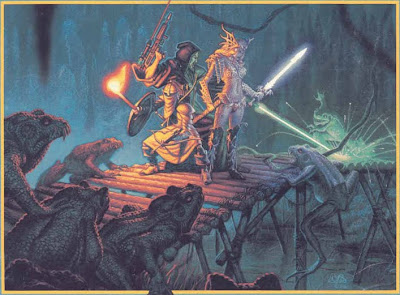 Posted by Timeshadows at 9:48 AM 7 comments

Having slept for only four hours, I then readied for a 10-hour work-shift.
--Who cares, right?

They sell tiny dioramas, but I didn't feel like spending the money.
--Instead, I have the 'map' of the place, and may scan-and-post.

Brain is a bit fried, but a Sharpe's adventure is about to show on Masterpiece Classics.

Posted by Timeshadows at 8:29 PM 5 comments

:: It has been an interesting and trying week, and the LGS co-owner has been kind enough to give me a break this week, as it would have been just Tyb's player and him at the game; my sweetie working this evening.

* Armed with various graphic representations of the probabilities of the 2d12 task-resolution mechanism, I've re-tooled the Referee's Spectral Index. I am eager to reveal it, but will hold off doing so.
--I think it will dramatically reduce the Referee's in-game work-load, as well as open-up the intuitive floodgates on rulings. But only for those who are willing to use it in that fashion. Fortunately, the system hasn't become dependent upon its use, and therefore cannot be sunk by its non-use.

* Having recently played in both B/X and Pathfinder games, I am very glad to have reduced the fiddly-bits of the skills to the ten categories, as a long list of discrete skills has proven, in my opinion, to be unnecessary, impractical to operate (find, maintain, etc.), and does nothing but simply add a bonus to an Ability Score check.
--My solution has been to list examples within each of the ten Skill Areas, and even to include Concentrations, but not to track the improvement of individual bits within them. A 'clever' descriptive mechanism facilitates the latter feature.
---As a character advances in Magnitude, the Player simply notes which Areas will receive their increase, and the entire batch improves, with Concentrations keeping their head-start in pace.

* A recent discussion on Dragonsfoot regarding the discrepancy between melee/muscle-powered ranged and Ancient tech weapons in most (all?) editions Gamma World reaffirms my decision to up the former categories weapon damages by a factor of 3, while still retaining the lethality of the Ancient tech.
--This isn't a CR-balanced sort of world, but with but a simple equation, a Referee can set damage output 'on the fly', so that TPKs are unlikely to occur for all but the unluckiest or most foolish of parties.

* I think that the Referee's Manual will be the most enjoyable portion to write of the proposed three, as very little of it will be mechanical in nature, and most of it will simply be one (of various) Referees talking to the reader in practical (and sometimes rather esoteric) terms about the art, business, and sciences of the Refereeing trade.
--The rest of the details are still under the hat...

* I'm hoping to have a small pre-production booklet ready in time for the North Texas RPG Convention in early June, covering the 'fall-off-a-log-simple' Character Generation, Equipping, and Combat sections, to be handed out along with the PreGens and SitRep handout, but no promises. ;)

Posted by Timeshadows at 5:14 PM 4 comments