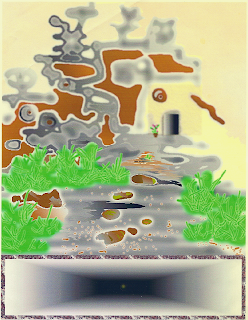 A villa located in Hexland, on the moon Yolm, orbiting the gas giant Malthesaen; part of the STARBLADE: Adventures Amid the Shattered Stars (sub-)setting, and part of the Urutsk Cycle. Circa 2001

I have spent the past week clearing out a 10' x 10' storage space from last year's move, and I have found a few treasures that coincide with portions I am currently writing. These go back to the early to mid 90's, before the OGL was a glimmer of desire in Dancy's fancy, and my suggestion to write new material for dead systems was laughed at by my closest friends (of the time).

One graph I plotted was too complex for even the then current version of Wolfram Mathematica, as the nice gentleman on the phone explained; something about the iterative additives to multiple co-dependent dimensions being to much to process at the time, if I remember correctly. Well, I've not only found the graph, but the hand-written rules for the feedback procedure. It gave me a warm, tingly feeling. :D

Seeing all of this work from pre- and early-2000's that is exactly what I am working on again, now, is really a snazzy feeling overall. But, I will say that my biggest mistake was ever listening to conventional wisdom, as it cost me over a decade of progress, and now my mute innovations have percolated up through the strata of Jungian space to become the provenance of other names, and other games. HaShem is funny that way. Makes you appreciate the private triumphs more when they happen, I suppose, in a rueful, 'what if' sort of way...

As I lay in bed at 4am, before the rain began, I thought back on my 30 years of game design, and all of the scores of systems (not including variants or revisions) that only a dozen or so folks ever saw or played. If each of them metaphorically represents a cosmos in the Metacosmos of The Grand Tapestry, then I've sown a lot of grain, to uh-- mix ... metaphors. :-|

Nothing profound to anyone else but me (and possibly Scott C., Karl P., and a few unsavories we know).

Posted by Timeshadows at 8:58 PM 7 comments