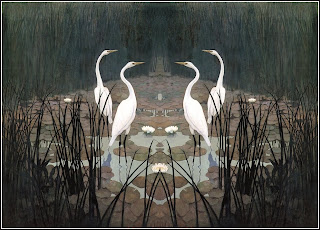 On one level, Urutsk is a setting, both for gaming, as well as fiction. It is an Alternate Reality with all that implies, and has been cultivated for nearly thirty years; one in which the land masses are often discernible, but in which the Peoples have diverged enough so as to be unrecognisable. It is currently (the Autumn Era) a wetlands planet slightly smaller than our earth, slightly further away from Av the system star, and a significantly wetter, stormier world. Evidence suggests that Av has not always been the primary gravitational point in the 'system' and indigenous folk claim that the 'Worlds Wander.'

Not so much a Dungeons & Dragons draped game in sci-fi trappings as a game of Skyrealms of Jorune hybrid with Metamorphosis Alpha and Gamma World, Urutsk is primarily the story of the Vrun people who have returned to the periphery-system after their galactic empire literally exploded. Stranded on a world their experts maintain is one of their points of origin, these Vrun are the relatives of all the Human ethnicities of the planet, having been culled from the 'very best' of these diverse folk long ago and set amid the then-extant stars.

Urutsk owes much of its scattered inspiration from '60's and '70's Sci-Fi Film, Print, and TV sources, mixed together in a strange slurry and allowed to ferment. Shows like ARK 2, SPACE: 1999, STAR TREK, Buck Rodgers, Mission Impossible, AVENGERS, The Prisoner, The Starlost, SWAT, and EMERGENCY! are admixed with DC Comics John Carter Warlord of Mars, Marvel's Killraven, and Banshee-era X-MEN as well as a lot of indie-mags my older sister turned me onto.

Urutsk' first real session was a Sci-Fi one, and has progressed from a contemporary/near-future setting through at least seven thousand years of history. More than the perusal of simple reference work has gone into the philological basis of the setting's languages (Vrun being but one of a few to have received my care over the decades), and outstanding linguists have noted Vrun's facility as an actual, usable language not-derived from any contemporary or known ancient source. This stems in part from my multi-lingual upbringing and the love of language my parents possess(ed), as well as my own interests in the effects of symbols upon human psychology (including subliminals).

I do not advocate 'shake-and-bake' bottom-up, quick-fix solutions in game-world design as anything more than a stop-gap measure to be re-examined and altered so as to suit the Big Picture (preferably one's own Big Picture rather than simple variants of pulp and weird fantasy) of the setting. The confusing mass of ideas and inspirations must, IMO, culminate in a work that helps describe the creator as much as the intent of the work. M. A. R. Barker's Tekumel setting, although pored over by ideoarcheologists of the neo-old school bent, is poorly understood as anything else but a proto-D&D archetype, replete with Underworlds, Barbarians ignorant of the setting's details, and a place filled with 'oddball and gonzo' critters and items. True admirers of the Professor's work (Jeff Berry and the Aethervox crew, and among the various mailing lists devoted to the setting: Sally Abravanel, Brett Slocum, Peter Houston, Alva Hardison, etc.) have long seen past the superficial (and sad) comparisons to more staid mock-Western gaming settings, and can appreciate variance in society, culture, mores, and language.

It has been my recent pleasure and honour to game with others who can parse these differences and appreciate the Urutsk setting for its own sake. That isn't to say that a dungeon crawl can't be fun for these recently-met players, but rather, that they seem interested in something more and recognise the soul that has been poured into Urutsk.

Perhaps, you too, are looking for something other than elves, dwarves, and hobb--halflings, and always expected more from a setting? Then, Urutsk may be a destination you would like to explore. I am running a regular game schedule on Google+: Wed/Fri, and Thursday beginning around 8:30-9:30 PM depending upon the players' schedules. The two games are separate but contemporary 'streams'. All times are -5 GMT/Eastern USA

We look forward to seeing you there.